Alleluia in the Darkness

And this is the truth, the hope and the joy of Easter; that loss and Resurrection are intertwined. 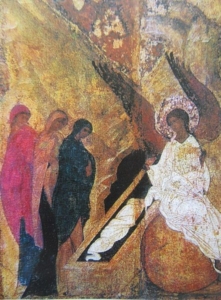 So they went out and fled from the tomb, for terror and amazement had seized them; and they said nothing to anyone, for they were afraid.

It’s not the ending you expect, is it?

After a Lenten season of repentance and introspection, we have the flowers, the music, the Alleluias—the excitement of a joyous celebration of the Resurrection.

And yet our Gospel tells us that the women run away from the tomb—afraid.

For some this may sound a discordant note in the joy of this Easter morning.

I thought it might just be me, but when I have told friends and colleagues that we were using the Resurrection narrative from Mark’s Gospel in this year’s Easter liturgy, the consensus has been that it is… perfect.

In our Lenten discussion of Barbara Brown Taylor’s book, Learning to Walk in the Dark, one of our group wondered what it might actually have been like to experience first hand the events of that first Holy Week and Easter. There wouldn’t have been a menu of observances and services from which to choose as we have done this past week at St. Martin’s. The first century was too early for formal liturgy; the liturgical symbolism of those mighty acts of Jesus’ passion wouldn’t have been symbolism at all—it would have been the raw footage of fear, confusion, anger, betrayal, violence, courage, love and grief. For those who witnessed the events of the preceding days, Easter morning would have been marked, not by hymns and Alleluias, but by exhaustion and sadness. And, for the women disciples in Mark’s Gospel, by bewilderment and silence.

They looked Easter in the face and didn’t know what to do with it.

Iwonder if this feels a little familiar—this feeling of not being ready for Easter? I confess that I have experienced it before, after the death of my mother a number of years ago. And, given the losses of this past year and the current suffering of the world, it should be no surprise that many may feel as though Easter is going on happily without them while they’re still sitting in the tomb. Maybe–in the way a Blue Christmas describes the feelings of sadness in a time of joy–maybe we should acknowledge the reality of a Blue Easter. But unlike Blue Christmas, which notes the contrast of present sadness with the joy of the original event, Blue Easter might actually reflect what it could have felt like to witness that first Easter Day, as grief refused to give way, even when confronted by the empty tomb.

So if these feelings seem familiar this year, we’re in good company.

But if that’s the case, where do we find the Easter joy and hope?

Because, spoiler alert: There is plenty of hope and joy to be found on this Easter morning. But first we need to get acquainted with the darkness of the tomb.

We begin with a question that has plagued biblical scholars for years: Did Mark the Evangelist intend to write such an abrupt ending to his Gospel, or was the fuller ending somehow cut off and lost? If you look at the end of Mark in your Bible you will find three endings. One is the original one that we hear today. It is followed by two appended endings that were attempts to make the Gospel end on a happier, more satisfying note.  N.T. Wright is one among a number of scholars who say that the original ending was somehow lost or cut off—there was no way that Mark, who wrote repeatedly of Jesus’ clear statements of his impending suffering, death and resurrection, would leave off the definitive resurrection appearances that were included in the other three Gospel accounts. For Wright, it just doesn’t add up, and the efforts of later writers to append what they felt were more satisfying endings are proof that others felt as Wright did about this sense of abrupt incompletion.

But the problem is that apparently there are no early copies of Mark’s text that show evidence of a missing longer ending. Representing the other side of the argument is Raymond Brown, who found Mark’s original ending to be perfectly consistent with the urgent tone, the direct, abrupt style and the theology of the rest of Mark’s Gospel. We’ve heard all along that Jesus’ followers resisted his statements concerning his fate. So with all respect to N.T. Wright, I agree with Brown on this one. What we see is what we get, and it offers plenty of material for pondering all by itself.

It is important to address two misconceptions that might arise from a first-impression reading of this passage. First, the women who fled in the face of the empty tomb were not weak or cowardly. These women had accompanied Jesus through his ministry, witnessed his crucifixion as others fled, and made a note of where Joseph of Arimathea took Jesus’ body so that they could come and anoint his body after the Sabbath. These women disciples stood by Jesus to the end.

Second, notwithstanding a lack of post-Resurrection episodes, the Evangelist does not leave any doubt as to Jesus’ resurrection itself. Not only does his Gospel state clearly at least three times that Jesus predicted that he would be raised, but everything about the imagery and vocabulary of this passage proclaims divine action and presence. The setup is clear: the women muse about who will move the great stone, so that when they see that it has been moved we immediately understand that divine action has accomplished this feat.  Then…

…As they entered the tomb, they saw a young man, dressed in a white robe, sitting on the right side; and they were alarmed. But he said to them, “Do not be alarmed; you are looking for Jesus of Nazareth, who was crucified. He has been raised; he is not here.

The words used to connote awe and fear in the women—“terror and amazement”– are customarily used to portray people in the presence of the divine. The iconography of a young man in a white robe is that of an angel. And his announcement is crystal clear: Jesus has been raised from the dead. Raymond Brown says that in this “ringing proclamation” we are not to doubt this truth, but instead to identify with the awe and fear of the women in this moment.

The Evangelist, in true Markan fashion, has left no doubt. Christ is risen. The Lord is risen indeed.

And it should knock our socks off.

In the best of times we should be struck speechless with awe before the first alleluia even passes our lips. But what about when we are struggling with Easter—when, as with the women disciples, the darkness of the tomb threatens to extinguish the joy of this moment? This is when we need to think a little more about what the tomb teaches us about resurrection.

As Barbara Brown Taylor writes, “…[T]here were no witnesses to the resurrection…Whatever happened in the cave happened in the dark…Whether it is a seed in the ground, a baby in the womb, or Jesus in the tomb, it starts in the dark.”.  [end quote] It does make you think: Creation itself began in the darkness, so why should it be a surprise that God’s resounding reaffirmation of Creation’s goodness and redemption would take place in darkness?

We think of darkness as a uniformly negative thing when it is actually a multidimensional combination of mystery and creativity that can take us on the journey through our suffering and grief into healing and new life. We have learned to fear darkness in our lives, in our culture, and even in our religion. Like the women in the Gospel, we want to flee the darkness of the tomb, seeing in it only loss and suffering, when the truth of the tomb is that it holds both loss and transformation at the same time, if we are willing to let it teach us instead of terrify us.

And this is the truth, the hope and the joy of Easter; that loss and Resurrection are intertwined. Jesus lived, served, suffered, forgave, died, and rose again to show us that Resurrection–not death and fear—Resurrection has the final say in the Dream of God. And now our risen Lord invites and challenges us to become People of Resurrection; to speak Alleluia to our hurting neighbor, to our suffering world, and to our own broken hearts. Jesus calls us to proclaim it, and to live into the truth, hope and joy of it: Alleluia, Christ is risen! The Lord is risen indeed, Alleluia