You are here: Home / History

Both the church and the parish house of St. Martin’s are listed on the National Register of Historic Places. The parish house is a half-timbered structure that houses offices, classrooms, kitchen,and social spaces that includes our Great Hall. This two-story hall is the location for all-parish events and serves the needs of many neighborhood groups.

In the interior of the Church, the nave (the central, open space of the church) is supported by oak truss work and lit by clerestory windows. The raised chancel (the area for clergy and choir) and sanctuary (worship space of a church/the area around the altar) lead to the high altar in front of a fine, carved oak reredos (ornamented screen) that surrounds a triptych (three paneled painting). The design is by Bertram Grosvenor Goodhue. The murals were painted by the celebrated painter Hildreth Meiere, a famous New York muralist whose work spans the Arts and Crafts and Art Deco periods. The reredos was the generous gift of Mrs. Howard P. Cornwell in memory of her husband, given in 1923. The central painting features the Adoration of the Magi, with the healing of Bartimaeus in the left-hand panel and Jesus’ charge to his disciples in the right-hand panel. The triptych is surrounded on all sides by a rich iconography of Christian saints, together with the emblems of Christ’s passion and the coats of arms of the diocese Tours, Canterbury, and Rhode Island. A reproduction of the reredos can be found in Catherine Coleman Brawer, and Kathleen Murphy Skolnik’s book: The Art Deco Murals of Hildreth Meiere.

Click To See A Close-Up View of The East Window

The Rev Lawrence Bradner on the early years.

St. Martin’s Church dates from March 3, 1885 when the first of a series of evening services was held on Waterman Street on the East Side of Providence. The corporation of Calvary Episcopal Church resulted from this modest beginning and was formed in 1897. Soon after, a wooden frame building was erected on Orchard Avenue. In 1912 Calvary Church merged with the Church of the Savior and the new united parish voted in 1916 to change its name to Saint Martin’s Church.
The need for a new and larger church building and parish house led to construction of the present stone edifice in 1917. Dr. Arthur L. Washburn then became the first Rector of our parish and served until 1929. The parish grew to more than 500 communicants by 1925.  Over the next decades, Saint Martin’s enjoyed a succession of excellent, energetic rectors. The Rev. Russell S. Hubbard went on to become Suffragan Bishop of Western Michigan, and subsequently Bishop of Spokane. The Rev. John Seville Higgins served as Rector from 1948 until 1953, when he became Bishop Coadjutor of the Diocese of Rhode Island.

In 1942, The Rev. John Butler, who went from being rector of St. Martin’s to a number of prestigious positions and involvement both nationally and internationally, wrote about his first visit with St. Martin’s Vestry: “I found them to be a splendid, well-knit group of faithful laymen.” Lay leadership in the parish was vigorous and remains so today, even though the first few decades in the early 20th century saw only two women on the vestry.

There is also a venerable tradition of music in the parish, centered around the magnificent Reuter pipe organ, which was installed in 1955. Choirs have long filled the sanctuary with sacred song, supporting our worship with anthems and hymns in the rich tradition of Anglican choral music. Presently, the church has a volunteer adult choir open to all, a children’s choir, and a professional vocal consort; guest musicians from some of the region’s finest ensembles regularly enhance the worship experience.

The Rev. Halsey De Wolf Howe served as rector from 1964 to 1973 appointed the Rev. Howard Blunt as the first African-American Curate to serve St Martin’s. The Rev. Robert Burch served as Rector from 1973-1977. From 1978 until 1996, the Rev. J. Daniel Burke, former college chaplain and a caring preacher and pastor, served St. Martin’s as Rector. The physical plant was substantially refurbished during his tenure. Also, as women became ordained to the priesthood, several of them served as assistant clergy over the years. The Rev. Ann S. Coburn and her husband the Rev Michael Coburn served for a period as joint Rectors. Ann Coburn was also the first woman Rector and served the parish with distinction until 2003. The Rev. David A. Ames served as Priest-in-Charge until a new rector was called in May, 2005.

The Rev. Clare Fischer-Davies began was appointed in July, 2005, serving as the 8th Rector until 2013. The Rev. Bill Locke served as Interim Rector from 2013 – 2014. Bill had the distinction of being one of a number of men and women who discerned a call to priesthood, during the Fr. Burke’s tenure.

The present Rector is the Rev. Mark R. Sutherland. He arrived on Trinity Sunday 2014 and was installed by Bishop W. Nicholas Knisely, on November 16th of the same year as the 12 Rector.

Martin was born in what is now Hungary in 316 AD, son of an officer in the Roman army.  As the years passed, Martin felt increasingly uneasy in the tension between his duties as a soldier and his Christian calling. He eventually decided that his life in Christ was incompatible with his military service. Martin resigned his commission and is the most famous early prototype of conscientious objections.  A famous incident defines Martin and took place near Amiens. On seeing a naked beggar at the city gate, Martin divided his cloak in half and gave half his cloak to a beggar in whom he saw Christ. It seems that Roman soldiers only ever owned half their cloaks, so legally, Martin had only half to give away. He then had a dream in which Christ appeared, wearing the cloak.  The Cloak of St Martin was preserved by the French Kings, Martin by this time being the Patron of France. It travelled with court, under the supervision of a priest who was known as the Chaplain, a term derived from cappa – the Latin for cloak.

After leaving his military service, Martin became a disciple of Saint Hilary at Poitiers and was baptized. From 360 onwards, Martin devoted himself to the monastic life.   His houses were first at Liguge near Poitiers and after 372, when he was chosen Bishop of Tours by popular acclaim at Marmoutier, which became a thriving monastery. Martin had a major influence on Western monasticism, particularly on St Columba, missionary to the Irish and St Ninian, missionary to the Scots. The oldest church in Canterbury bears his name.

In an age when Christianity was largely confined to towns, Martin saw monasteries as a way of promoting rural evangelism based upon spiritual centers.  He himself was a most assiduous Bishop, carrying out frequent visitations and defending doctrine. 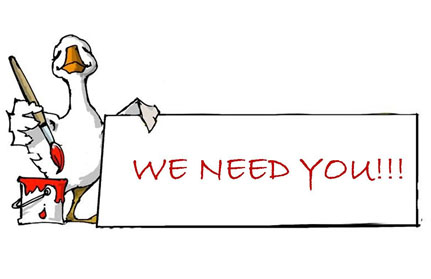 One of the symbols associated with St. Martin is the Goose. Legend has it that Martin did not want to be made Bishop of Tours, so he hid out in some farm buildings. When church officials came looking for him the geese put up a great racket and exposed his hiding place. St. Martin’s Church has taken on the goose as a mascot and occasional spokesperson.

Martin’s followers panicked when he told them he knew he was near death, but the Saint entrusted himself to the Lord’s will in the words: “Lord, if your people still need me I do not refuse the work; let your will be done”. He died on November 8th, 397.

The Rev Lawrence Bradner in conversation the following history was written by Fr. Larry Bradner in answer to questions about the window’s origins during its current full 2015 restoration

The installation of this window is reported by Rector Arthur Leverett Washburn in an issue of the St. Martin’s Staff in the fall of 1918. The window was executed (and signed) by Mrs. Harry E Goodhue  who had a studio in Boston; She claimed that the window had been designed by her husband, Harry E. Goodhue shortly before his death. Harry E. Goodhue was a prominent stained glass designer and maker. Some of his windows show some his own exciting  new developments in the design, choice of materials and execution of stained. ( A beautiful example of that is a large window in Emanuel Church, Newport. Our St. Martin window is not one of those, yet the use of color, the use of exquisite delineation of the scenes, and the overall color is magnificent. Our bishop, The Right Reverend James DeWolf Perry had a very high opinion of Harry E. Goodhue’s work according to a letter H.E.G. wrote to his brother, Bertram Grosvenor Goodhue.  B.G.G. was the more famous of the two brothers. He designed some church buildings and of others he provided the interior design.B.G.G. designed much of the interior of St. Martin’s. The lectern, the High Altar setting including the reredos were of his design. However, the panels in that reredos were conceived and executed by Hildreth Meiere who was part of B.G.G.’s studio at the time. The processional Cross was designed and executed by B.G.G.
Bishop Perry, along with his wife, Edith Weir Perry, was very knowledgeable about church art and architecture. He was very interested in the success of the new St. Martin’s venture. I interpolate that he advised Rector Washburn to hire the architect, Wallis E. Howe, and the Goodhue brothers for our project.
Harry E. Goodhue, had been in poor health; his early death was a great loss to the family and to the Church. Bertram Grosvenor Goodhue may have been jealous of the family’s reputation.  I read a letter in the Bertram Goodhue papers at Columbia in which B.G.G writes to his late brother’s widow and accuses her of getting some other artist to design our St. Martin’s window, and passing it off as the work of her more famous late husband. I do not know of any data which proves B.G.G’s accusation and have not yet been able to do the research to resolve the question.
In his 1919 letter to the Parish Dr. Washburn talks about the choice of side panels in the window. It is clear that his love of France, where he served as a frontline chaplain during the war, influenced the subject matter of some of the panels.
It seems likely to me that our St.Martin window is our oldest one still in place. However, I have not been able to date the large window over the High Altar in memory of one of our parishioners who died of flu in France during the war.
However, our oldest window, until it was replaced in 1948 is most likely the one that Harry E. Goodhue designed and executed for the space over the Chapel Altar. Along with Dr. Washburn, Father John Vernon Butler, Jr., (1942-1948) had significant positive influence on the St.Martin’s art and architecture. However, Fr. Butler had an unfavorable view of much window design from the early 20th century. He once described the original window over the Chapel Altar as “a horror”. He persuaded the family that gave the original to have it replaced by the present window which has the deep blues and reds we also find in the 1948 West Window. I wish I could remember what that scorned original window looked like.
In 2015, years of water damage seeping through cracks in the tower above led to the an urgent need for the renovation of much of the stone-conglomerate tracery that frames the window. At the same time, the glass was removed, cleaned and releaded. In time for Easter of that year, the window was reinstalled. An appeal for donations to cover the cost of renovation, some $150,000 was launched in memory of the much-loved Rev. Dan Burke, who died during this period of the renovation.