Numbers 21 and John 3 instance homeopathic spiritual healing. By homeopathic I mean the same toxin that kills becomes the antidote and the source for healing. 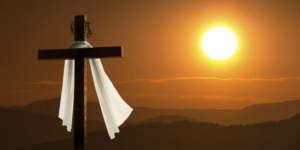 On Thursday night President Biden spoke in his first prime-time address to the nation on the one-year anniversary of the first cases of the Coronavirus in the US. After months of warning that the “darkest days” in the battle against COVID-19 “are ahead of us, not behind us,” the President struck a more optimistic tone offering a glimmer of hope that Americans may see some semblance of normalcy by Independence Day.

He mourned our “collective suffering, a collective sacrifice” over the last year but pivoted to a more hopeful future not with empty promises of an economy roaring back better than before – although we all have hope that this might be so – but by announcing practical steps towards the goal of making all American adults eligible to receive COVID-19 vaccines no later than May 1. He invited us all to “do our part” in the coming weeks, so that friends and families will be able to join together in small groups in time for Fourth of July celebrations.

The one-year anniversary is the context within which I speak to you on this fourth Sunday in Lent in 2021.

Casting back 12 months I well remember our bewilderment as we abruptly shut-down in-person worship with the forlorn yet completely unrealistic hope we would be back for Easter. In the coming weeks and months, the challenge ahead of us was how to continue to be church in the world when for us as liturgical Christians, the weekly experience of communal gathering in worship before God was denied to us?

Looking back, we moved forward, at first haltingly but with gathering confidence as over the spring and summer we perfected our audio podcasting of the Liturgy of the Word webcast each Sunday. While continuing the weekly podcast, after the July 4th we moved outside so that once again we could gather to celebrate the Eucharist in the novel setting of Orchard Place.

On Orchard Place we discovered two things. The first was how much we liked worshiping out of doors. This discovery will not be lost as we contemplate the summer ahead when we will once again move worship outside. But the second discovery was a surprise to us. It was – that we needed the Eucharist.

Many among us may not fully realize the implication of this. Hitherto Eucharist was something we did when we gathered for church each Sunday. I often felt that Eucharist itself was but the warmup for the primary sacrament of coffee and gathering. Denied the social and aesthetic reasons for coming to church each Sunday, over the summer we discovered a need many of us were only dimly aware of. We discovered that we needed to gather each Sunday so that we could celebrate Eucharist together. Through outdoors worship we discovered how to scratch the itch we didn’t know we had. Eucharist, no longer the incidental of gathering now became the reason for gathering.

Still, many could not join us even outdoors and so we continued to work at the technical challenges of building a robust online worship presence. Since November it has been our online livestream presence that has sustained our worship life. Paraphrasing the poet John O’Donohue, our minds have come alive to the invisible geography inviting us into new frontiers, breaking the old shell of yesterdays, to risk being disturbed and changed.

On the fourth Sunday in Lent in year B of the three-year lectionary cycle of readings we revisit two passages that in 2021 take on a particular significance for us.

Out of the mists of time there comes to us the echo of the events recorded in Numbers 21 . The Israelites, a ragtag band of disparate and desperate clans and tribes, overwhelmed by the harsh experience of finding themselves thrown together in a very inhospitable environment, have given themselves over to unrestrained complaint and incessant grumbling. For them as if to add insult to injury a further catastrophe strikes them in this harsh desert environment – an infestation of venomous snakes. Many die.

The Deuteronomists – the scribes who much later recorded this event in the book of Numbers, liked simple explanations for catastrophes. Bad things happened because the people caused them to happen and so had to be corrected by God through harsh punishment.

What’s fascinating about this story is not the punishment but the cure. God instructs Moses to break the Second Commandment – you remember the one against making graven images – and forge an image of a serpent in bronze and raise it up over the camp so that whoever comes within its shadow and gazes up will be cured and live.

In Chapter 3 or John’s gospel we encounter Jesus with Numbers 21 very much on his mind. He states:

Just as Moses lifted up the serpent in the wilderness, so must the Son of man be lifted up … .

In Numbers 21 and John 3 we find instances of what I call homeopathic spiritual healing. By homeopathic I mean the same toxin that kills becomes the antidote and the source for healing. It’s no coincidence that the image of Moses’ bronze serpent raised up was also known to the ancient Greeks as the Rod of Asclepius or the Caduceus – subsequently becoming the symbol Western medicine.

Before the supernatural spiritual effects of the Cross of Christ, we must remain silent and allow the power of the image to cast its deep shadow over us – alerting us to a different kind of enquiry. Rather than to idly speculate about the dynamics of spiritual healing, we need to ask a different question.

As we gaze up from within the shadow of the cross – what is it we discover about ourselves?

Standing beneath the shadow of the cross what do we discover that will help us to chart our way forward – guided by the what the ultimate symbol of God’s love for the world reveals to and about ourselves and the kind of future we need to work to build?

Recalling the one-year anniversary of the outbreak of the pandemic, we now live under the shadow of another kind of totem – the pestilence that walks in darkness, the destruction that lays waste at noonday (Psalm 91.) The virus that strips us of illusion and lays bare the fault line of injustice.

As we look up under the shadow of the Coronavirus totem, we are invited to become a future different from our past.

In the shadow of the Coronavirus molecule, we are forced to recognize what for decades we have turned our faces away from seeing. The images of what lies exposed about us amidst the ruins of a pandemic devastated world are the very images that reveal to us the contours for a future hope.

Herein lies the healing path illuminated within the shadow of this particular totem.

Like the bronze serpent and the cross, the Coronavirus totem reveals that the very toxin that has taken a staggering 500,000 and rising of our loved ones and fellow citizens from us – that has wrought global economic havoc and hardship to unimaginable numbers of individuals and communities– this very toxin must now become the source of our healing – so that we may now accomplish the things we came here for and waste our hearts on fear no more.