The Shape of a Dream

“Mary took a pound of costly perfume made of pure nard, anointed Jesus’ feet, and wiped them with her hair.” 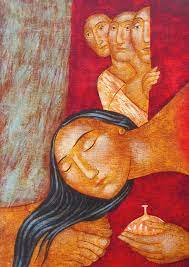 At the beginning of our Lenten journey a few weeks ago, I offered a few things for us to ponder during this season: What does it mean to be human? What does it mean to be a child of God? What does it mean to be a follower of Jesus? In the weeks since the outbreak of war in Europe, it could be that these questions have taken on new urgency and poignancy. For example, in our Tuesday night Lent program, we have found ourselves deep in conversation about courage, defiance, lamentation, fear, and faith; almost always in the context of the Russian invasion of Ukraine. It has surprised me (although perhaps it shouldn’t have) how deep our discussions have gone in just 90 minutes each Tuesday evening.

It is evident that there is hunger to find God in the midst of these anxious days, and to make meaning of this moment.

So it may come as a surprise, in the context of this spiritual hunger, to come to the Fifth Sunday in Lent, on the cusp of Palm Sunday and Holy Week, to find ourselves at a feast; a party.

“Six days before the Passover Jesus came to Bethany, the home of Lazarus, whom he had raised from the dead. There they gave a dinner for him.”

Until now, I’ve always overlooked this detail. But it offers important context as we engage with this story.

Jesus has raised his friend Lazarus from the dead, restoring him to his family and his community. Imagine how momentous this must be for everyone. The joyful energy around Bethany would be compounded by the anticipation of the coming Passover festival—a celebration of deliverance and liberation. The home of Lazarus, Martha and Mary is filled with joy, laughter, and the smells of roasting meat, fresh bread, and good wine.

But the joy is tempered. These are dangerous days for Jesus and his followers. The shadow of Empire looms and lurks everywhere, and what Jesus has done by raising Lazarus has drawn notice in the halls of power. The Temple authorities are worried that Rome will interfere. At a meeting of the council, they had said:

“What are we to do? This man is performing many signs. If we let him go on like this, everyone will believe in him, and the Romans will come and destroy both our holy place and our nation.”

And so they have plotted to kill Jesus, and Lazarus as well. The family and friends in Bethany may be unaware of the council’s exact plans, but they know that Jesus’ actions, teachings, and reputation have made enemies as well as followers.

So, while there is joy in Bethany, there is also anxiety. The chatter of friends and the scents of food are mingled with the intertwined thoughts of life and death.

It is into this scene that Mary enters, carrying a pound of perfume made of nard worth a year’s wages. She puts the container down beside Jesus. She takes off her head covering and unbinds her hair. She pours the oil on his feet, and almost instantly the earthy/mossy/musky scent overwhelms the smells of cooking, drinking, and the warm bodies gathered close in the room. Everyone focuses on Mary and Jesus as she gently wipes his feet with her hair. No one speaks—what is there to say in the presence of such an outrageous gesture?

Unlike other gospel versions of this story, she is not weeping.

This intimate and prodigious gesture is a gift to the one who restored her brother to life. It is also an acknowledgment of the risk, the cost, and the joy of the inbreaking Kingdom. Jesus acknowledges that her action foreshadows his death. By extension it anticipates the Resurrection that will follow because, for us, death and resurrection are inextricably linked.

In a single act of gratitude, generosity, and intimacy, Mary articulates the shape of the Dream of God.

In contrast to Mary’s actions, we have Judas’ words.

“Why was this perfume not sold for three hundred denarii and the money given to the poor?”

Let’s set aside the Evangelist’s parenthetical comments about Judas’ dishonesty. Judas doesn’t have to be a thief to have missed the point of what Mary has done. As a matter of fact, if someone besides Judas had made that comment, even today, we might well agree with them. But there is more here than a call to charitable giving. Mary’s actions, Judas’ rebuke of her, and Jesus’ response are an invitation to engage with the questions I mentioned at the beginning: What does it mean to be human? To be a child of God? To be a follower of Jesus?

Judas, like the cynic, might be said to know the price of everything and the value of nothing. We see examples of this every day: For example, climate change is drowning and burning the most vulnerable people and creatures on this planet because the least vulnerable of us don’t want to pay the price of saving and repairing what God has created and called good. Or the news that this week Congress finally passed a law making lynching a federal crime after over 200 failed attempts, because for over a century bigotry and political self-interest outweighed the value of Black children of God. Or the fact that Ukrainian hospitals, shelters and apartment blocks are being bombed because an egotistical despot knows the price of his yachts but places zero value on the lives of children.

Yes, we know what it looks like to know the price of everything and the value of nothing.

Judas’ dismissal of Mary is symptomatic of a vision of the world that is in fact blindness to the reality of God’s Dream for Creation. Judas is blind to the deeper truth that God’s economy does not dispense charity, it shares bounty. Looking at it spatially, there is a difference between the vertical dynamic of helping — wherein the privileged, supposedly greater ones, reach downward to the so-called “least of these” — versus the circular dynamic of serving—wherein God’s children listen to and learn from one another from a stance of mutual vulnerability. This circle is the shape of God– of the Dream of God.

When Jesus says, “You will always have the poor with you,” we are challenged to hear particular emphasis on the word “with.” Mary’s actions of gratitude, generosity, and yes, intimacy toward Jesus are a call to be in relationship with those who have been economically or socially marginalized—to see them anew as valued children of God, not as occasional recipients of bounty dispensed according to the dictates of political and economic expediency.

Mary understands what Judas does not; that to live into the image and likeness of God is to know that the cycles of life and death, joy and suffering, receiving and giving, are all part of what it means to be human and a child of God. It is to glimpse resurrection as an ever-present invitation to abundant life.

Can you imagine what the world would be like if we all lived into Mary’s vision? Can you imagine how different our planet, our relationships, our politics would look if we valued our interdependence over our self-interest?

Our first reaction is to see it as a pipe dream. But if we really believe that it’s a pipe dream, then why are we here?

On Ash Wednesday a few weeks ago, we acknowledged that God alone is our source and our end. We also acknowledged our need for repentance; our deafness to God’s call to serve, our self-indulgent appetites and ways; our exploitation of other people; our blindness and indifference to human suffering, injustice and cruelty.

Our seeing of the price of everything and the value of nothing.

It may seem counterintuitive, but to repent is to hope. It is to know deep down that God’s Dream is real and that with God’s help, as followers of Jesus, we can accept, with joy, God’s invitation into the vision of a more interdependent, less fearful world.

This is why we are here.

Therefore let us keep the Feast.