This is how the truth comes

Abstract: For Luke, this is a story that begins in the solidarity of two women plotting against the age-old patriarchal control over a women’s reproductive body. 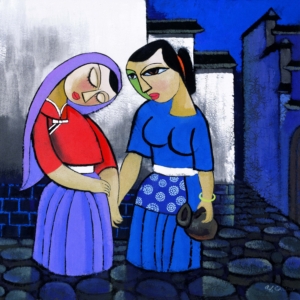 How old is she, I wonder? 13-15 years-old? We don’t know. What we do know is that she’s just a girl. Maybe a girl already betrothed, but a girl nevertheless. A girl betrothed as was the custom of her people. But a girl according to the betrothal custom of her people should not have yet come to know the man to whom she is betrothed in the intimacy of sexual intercourse. She hasn’t, – well as far as she knows. Yet, how to explain the strange stirrings in her belly? Whatever – however – these things are happening. Mary is very, very scared.

She’s scared, and yet, somewhere deep inside her she feels something else, a consolation, a rightness that defies all rationality. At night her mind flits to-and-fro, back and forth. One moment calm, she feels the assurance of a consolation. In the next moment – the grip of terror takes hold once again.

St Martin’s, Providence, is one of the finest examples of both English domestic Gothic form and ecclesiastical Arts and Crafts in New England, if not wider afield. It has both nave and clerestory levels of stained-glass windows telling the story of faith and life. Although put in over a 40-50-year period, all the windows stylistically conform to a master schematic – presenting a holistic integrity in style and an orderly progression of themes. Like the Medieval cathedrals and churches, St Martin’s windows are more than decoration, they tell the story of Christian faith and Western culture.

The nave windows form a progression in which the story of Jesus’ life unfolds in sequential chapters. The first window begins with the chapter occurring before the one we hear about in Luke’s Gospel on Advent IV – the announcement from the archangel Gabriel to this 12-13-14?, year-old girl. The next window depicts the events of Luke 1:39-55. In this window we see two adult women, one clearly middle-aged while the other in the full bloom of early womanhood. Both sit appearing to be in conversation; each depicted with a boy toddler – two maybe there year old, sitting in their lap.

This is the window that depicts the event we call the Visitation, when Mary journeys some distance to visit with her older cousin, Elizabeth. Elizabeth is also pregnant. Again, her pregnancy, like Mary’s is unexpected. But in her case, the surprise is one that defies biological rather than social convention, because Elizabeth is decidedly post-menopausal.

There are deeper strands of significance weaving through this story of Luke’s. Elizabeth and Mary are cousins. Luke tells us that Elizabeth is married to Zechariah, and that Zechariah is of the priestly clan. Luke, here, clearly wants us to know that Mary too is related a priestly family, thus telling us how Jesus is connected into the institutions of his Hebrew people. For his readers, this is a matter of some importance in supporting their claim that Jesus is the one promised to Israel. Elizabeth’s son is John the Baptist, who is not simply the cousin to Jesus, son of Mary, but the prophetic Elijah, who later in the wilderness will announce the arrival of the promised one.

At the time of their meeting, neither woman has yet given birth. Yet, here they are with two toddlers in their laps. Perhaps the explanation for this lies in the year the window was made – 1924, a period when WASPy social convention was clearly uneasy with the depiction of pregnancy in the sacred precincts of the church. This is how we dress-up, gloss over in order to distance ourselves from the rawness of the biblical story.

Back to Luke’s actual story –  In those days, Mary went with haste to a Judean town in the hill country. Because of the discrepancy in their ages, it seems probable to assume Mary’s and Elizabeth’s relationship is one more typical of niece and aunt. Maybe this is the reason Mary has come to Elizabeth. Uncertain of her own mother’s reception of her news – she comes to the woman who has always looked out for her and whom she knows will protect her. Mary rises early, and with haste, flees to the bosom of her aunt.

Mary leaves in haste, because she is very, very scared. She lives in a society that practiced honor killing for girls made pregnant outside wedlock – interesting word. Though betrothed to Joseph, Mary is not yet locked into the social convention of weddedness that would explain and approve her pregnancy.

So, Mary sets out with haste – in flight – to the protection of her aunt – in the distant hill country of Judea. It’s speculation, but maybe she continued in the seclusion of Elizabeth and the kindly Zechariah’s protection until the middle-aged Joseph agreed to marry her. But the content of Joseph’s mind is part of Matthew’s telling of this story, not Luke’s. For Luke this is a story that begins in the solidarity of two women plotting against the age-old patriarchal control of a women’s reproductive body.

Luke take an earlier song of a woman’s jubilation – Hannah’s song from the second chapter of the first book of Samuel – and transposes it into Mary’s key. Mary sings out in jubilation the story of God’s generosity towards her, and through her, to generations yet to come.

What is the essence of Mary’s jubilation? It is that at a deeply intuitive level she perceives the significance of her acceptance; of the exercise of her individual responsibility to participate in God’s dream for the world. This is how God’s call for human collaboration comes. She sings out:

It extols,
my life does,
haShem.[1]
It rejoices,
my breath does,
at Elohim[2] my deliverer.
Because Elohim looked on the humility
of his female slave.

Mary sings out that this is a dream for justice, of putting to rights those things that are currently so very wrong:

His mercy extends
into birthings and birthings
of those reverencing him.

He made strength with his arm,
he scattered those visibly superior
by the intentions of their wills.
He put down the capable from thrones
and exalted the humble ones.
Hungry ones he filled full of worthy things,
rich ones, out and away he sent them,
empty.

How will the Messiah – the promised one – come? He will come in obscurity, through the courageous cooperation of human agents like Mary and Joseph, Elizabeth and Zechariah. He will come – the homeless God – who calls all human homelessness, home.

In the womb of an adolescent girl, untimely pregnant, who has had to run for her life, the next chapter in Israel’s long story of God’s dream for the world awaits fulfilment. How many other countless young mothers are running for their lives, shielding their unborn and shepherding their born children from danger in the hope of finding the equivalent of an Elizabeth and Zechariah – who in the bigger picture are representations of you and me – for all us together – we who have the power and resources to provide a place of safety?

God comes into the world not as a prince, born to power and priviledge, a political figure of power and influence. God comes into the world not as a successful culture icon, but as a babe, protected for a time within the womb of an adolescent girl who finds shelter in a world of patriarchal danger. God comes through the collaboration of a frightened and courageous girl-woman – given shelter and protection by an older woman for whom God also has an untimely purpose. Pray God that like Mary and Elizabeth we may not be found wanting when the time for our decision making comes.

[1] HaShem. noun. Judaism a periphrastic way of referring to God in contexts other than prayer, scriptural reading, etc because the name itself is considered too holy for such use. [2] The true God

Featured Image ‘The Visitation’ by Dr. He Qi, China/USA