Live Streaming of the December 24th Christmas Pageant at 4pm

Live Streaming of the December 24th Midnight Mass at 9pm

In our household, this year has been The Year of the Baby. From May through October we eagerly awaited our first granddaughter, who came last month. The best part—apart from actually seeing her in person– has been the smile videos. The first one came the first week of December, as sleepy Lucy B. lit up in response to her mom’s face and voice—it was magical. And when I saw the latest installment a few days ago with even more smiles, a coo or two, and the cutest little snort, I was useless.  I just ran that thing on a loop for about five minutes. 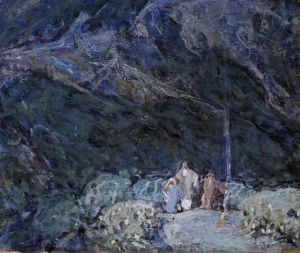 A delightful and unexpected bonus of all of this has been watching other people’s faces illuminate when they see these videos. They gasp, they glow; they squeal, they melt.

It never fails. Babies transform us.

We’re wired for it, and not just in the way you’d expect. Of course, biologically and anthropologically we go bonkers over babies because the attraction is an important factor in the perpetuation of the species. But it’s not just that it’s in our biological and cultural DNA; it’s in our spiritual DNA as well. The loving gaze between parent and child, the deep sense of connection and joy that transforms and breaks open the heart at the sight of a baby’s smile—this is a reflection of the Divine gaze. It is a participation in the very life of God, where we’re invited to remember what we’ve known from the beginning but have somehow forgotten—that we are truly and irrevocably beloved.

And Luke sure could tell a story.  He had a unique ability to construct a scene–whether sweeping and grand or humble and personal–that has a quality of intimacy that draws us in. He chose and constructed his encounters within his Gospel in order to articulate their life-changing nature. From the very beginning of his Gospel—even in the way he addressed his work to “…you, most excellent Theophilus”—which means “friend/beloved of God”—he leads us to feel that we are Theophilus–the sole intended recipients of his story. It is a story that will change us in unexpected ways, because that’s what happens to the people he shows us: An angel brings news of pregnancy to heretofore-barren Elizabeth and her skeptical husband Zechariah; their son would be the prophet John, forerunner of the Messiah. Another angel invites Mary to be the Godbearer, and the world holds its breath as it awaits her Yes. We see in these two separate scenes two women in liminal encounters with the divine, articulated by Luke with vivid immediacy, evoking amazement, awe, fear, joy—“How can this be?” And yet, here it is. The impossible becomes possible, the humble is exalted, and the world is about to change.

Luke’s story tonight takes us to Bethlehem. “In those days…” In those days the Empire decreed and people obeyed. Joseph and Mary were among the countable—the people the Emperor wanted accounted for, presumably for when it came time to pay their taxes. That’s how it was in a time of Roman occupation—in those days. Augustus says jump and the world asks, “how high?”

And then the world changed.

“And she gave birth to her firstborn son and wrapped him in bands of cloth, and laid him in a manger”

One sentence. And nothing would ever be the same again.

The Empire didn’t notice at first, although they certainly would later. The only people who noticed that night were a bunch of shepherds. They weren’t among the countable. While everyone else was flocking to Bethlehem they were out in the fields doing their jobs; unnoticed and unheeded, except by the sheep. To be honest most people generally preferred that they keep their grubby unkempt livestock-smelling selves to themselves, out there in the fields, on the margins of the town and of society.

It was to these shepherds that the angels came. It was on them that the divine gaze fell. It was they to whom the angels declared that today was no longer, “those days” of imperial decree and occupation. Time itself had been transformed, from Emperor’s Time to God’s Time– This Day–the day the angels sing and proclaim the Good News. “Unto you is born this day a Savior…”

How can this be, that angels would come to the shepherds—to the unwashed and the unseen—to announce something as momentous as the birth of the Messiah? How can this be, that they, and not the more well-connected, are the first to rush to the manger to see the Child—first in line to gaze at that adorable wrinkly extraordinary face?

“When they saw this, they made known what had been told them about this child; and all who heard it were amazed at what the shepherds told them…. The shepherds returned, glorifying and praising God for all they had heard and seen…”

They gasped, they glowed; they squealed, they melted.

They came face to face with the Divine Gaze, and they were transformed. They would never be the same again.

Luke knew the significance of this encounter. He knew that how we see and are seen by God becomes how we see and interact with the world. He knew, as we have learned and are continuing to learn, that theology creates our worldview. A transactional judgmental god will create a power-centered and self-centered worldview that divides and excludes. But a transformational compassionate God will create a justice-centered worldview that draws the center outward to the margins and the edges, that welcomes and includes; that heals and reconciles.

We become what we worship.

Luke’s story of shepherds, angels, and a small misfit family in Bethlehem is an upside-down tale of a world where God’s time becomes interwoven with human time; where a Messiah is swaddled in a manger among livestock; where the loving gaze of a child will bring shepherds and kings alike to their knees.

How are we to hear this story as we approach the manger tonight? As we trudge forward, exhausted from the manic energy of the Season even as we yearn for Advent quiet; as we feel bowed down by another COVID holiday; as we worry about the world’s brokenness while carrying our own personal burdens?

Do we dare accept the angels’ invitation to make our way forward, to look upon the face of the Beloved and to find in it a reflection of God’s unsurpassed and irrevocable love for us? Do we dare take the risk of gasping, glowing, squealing and melting with joy? Do we dare to be transformed—re-aligned—by an encounter with Hope in swaddling clothes?

In his poem, “Christmas on the Edge,” Malcolm Guite writes:

…Christmas sets the centre at the edge.

And from this day our world is re-aligned

A tiny seed unfolding in the womb

Becomes the source from which we all unfold

And flower into being. We are healed,

The end begins, the tomb becomes a womb,

For now in him all things are re-aligned.

Today is This Day. O come, let us be forever changed by him. Amen.