Volodymyr Zelensky “I need ammunition not a ride” 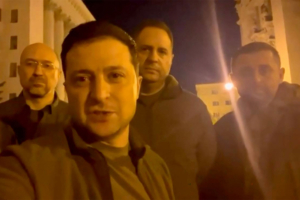 In Courage and Vulnerability,  David Lose in 2016, reflecting on Luke 13:31-35, the gospel portion to be read this Sunday, highlighted two different kinds of courage.

The first kind is the unthinking spur of the moment reaction in the face of threat. This kind of courage says something about a person’s underlying character, their personal traits shaped by beliefs, training, and patterns of behavior developed over a lifetime.

The second kind of courage is also an expression of character formed by  a lifetime of facing fears and shouldering burdens.

The presence of choice means the second kind of courage is always an avoidable response. We know we could just walk away. After all who doesn’t want a quiet life. The choice is ours.

I know I can be courageous if I have no time to think about whether to get involved or not. But if given the opportunity for deliberation, I’m more than likely to shy away from the courageous gesture if the choice to do so is available to me. This kind of caution is a quality I least admire in myself – the reluctance to get involved when the option of walking away presents an alternative for action.

I suspect most of us are like this in that the second kind of courage is an exception to the rule. Therefore, we so admire it in others when we see it – and we know it when we see it. We see it in Alexei Navalny – someone taking a very costly stand and refusing to feel afraid – a quality for which Navalny earns our undying admiration.

In the last two weeks, the hitherto unlikely figure of Volodymyr Zelensky has become our number one poster boy for the second kind of courage. Like Navalny, Zelensky refuses to be cowered. When offered the chance to avoid leading Ukraine’s courageous defiance in the face of the other Vlad’s (Volodymyr and Vladimir are the Ukrainian and Russian equivalents of the same name) –vindictive blood lust, he responded to the US offer of evacuation with: The fight is here; I need ammunition, not a ride … I am staying in the government quarters together with others. The enemy has designated me as target number one, and my family as target number two.

He has subsequently safely evacuated his family, but Kyiv’s administrative center is where he remains – marshalling all his communication skills and savvy media knowhow to continue to inspire his nation and the rest of the free world with his brand of Churchillian courage.

Speaking of Churchillian, I can’t let the opportunity go by for a comparison between Zelensky and Boris J. The standing joke about Boris j is that he thinks he’s Churchill, but he’s really Steve Coogan (a well-known British comedian). Despite his aspirations to statesmanlike grandeur, a comparison with Zelensky exposes Boris J as a mere Churchillian wannabe. The contrast between the character of the two men is an instruction in the second kind of courage.

Zelensky’s sense of moral courage is displayed in his strong sense of purpose. He’s a man who knows he’s in the defining moment of his life. He grasps his sense of destiny. In this he emulates a Jesus kind of courage.

After coming down from the mount of Transfiguration in Chapter 9, Luke takes us on Jesus’ head spinning whirlwind tour as he moves rapidly throughout Galilee healing in some places, exorcising in others, and everywhere confronting his critics. In 13:31-35, Luke reports an exchange between Jesus and a group of Pharisees. They attempt to warn Jesus he’d better high tail it out of town to avoid Herod’s threats to silence him.

Luke doesn’t hint at the motive behind the Pharisees warning. It could be genuine concern – after all while Jesus is often in confrontation with Pharisee groups, he’s also continuing to accept dinner invitations from them – indicating the Jesus-Pharisee relationship is not black and white. Perhaps the warning is self-serving? After all, Herod’s probably not the only one who wants this agitator of the crowds gone from the local scene. We just don’t know – Luke provides no hint as to motive.

Like Zelensky, Jesus is no stranger to threats on his life. After having survived several attempts to kill him – the most notorious being his fellow Nazarethites attempt to throw him off a cliff – Jesus is not going to allow the machinations of Herod to alter his timeline. Describing Herod with a stunning image of that fox, Jesus asks the Pharisees to tell Herod that he’s casting out demons and performing cures today, tomorrow, and on the third day – and not before then will his work finish. Today, tomorrow, and the next day I must be on my way, because prophets don’t die in Galilee, they are killed in Jerusalem. Jesus already appears to have some sense of a timeline for events – probably dictated by the Passover dates – he’s not going to allow anyone, let alone that fox Herod to derail him from his destined confrontation with sacred violence.

Violence takes several different forms depending on the situation and context. There is random as well as orchestrated violence – that is, ordinary violence whether spontaneous or personal. Then there is sacred violence – that is, communal – collective violence as an instinctive response in defense of a perceived higher cause – be it religious, ethnic, racial, or gender motivated in nature.

Jesus’ path to the cross is the journey to his courageous confrontation with sacred violence. Consistent with the second kind of courage for Jesus this confrontation with sacred violence was a deliberate choice. A choice it’s not hard to imagine he had numerous opportunities to avoid making or once made to still walk away from. In Luke 13 we see him refusing to walk away from his sense of destiny.

Sacred violence is as old as humanity. It’s so instinctively programmed in us that we cannot imagine any alternative to its cycles of endless repetition. Our propensity to remake God in our own image leads us to believe it’s our job to protect God with our sacred violence. Caught in its repetitive grip we are blind to the ironic paradox that it’s our sacred violence that killed Jesus – and each time continues to strike at the heart of God.

It’s counter intuitive for us to believe in a God whose protection of us is to die to our enemy’s violence – even when the ultimate promise is resurrection. The last thing we need is a God encapsulated by Jesus’ image of the mother hen protecting her chicks by offering her breast to the fox – giving her chicks time to scatter.

To break the instinctive grip of sacred violence upon the human psyche Jesus knew that he – as God’s agent – must first demonstrate that it could be done. O Jerusalem, Jerusalem, the city that kills the prophets and stones those who are sent to it. It’s only by going to the very source of sacred violence – that God, in Jesus, finally and for all time broke its power over us.

One of the hallmarks of sacred violence is its brutality – a brutality more shocking to us because this time it’s unleashed on people recognizably like-us. Ukraine is not the first time Putin has unleashed his sacred violence as the tool of his imperial dreams, but Ukrainians are more like us that his previous victims – Muslim Chechens and Syrians. We identify with Ukrainian suffering because their suffering could – if Putin has his way -so easily , and may inevitably, become ours.

Volodymyr Zelensky is not Jesus – and here any comparison breaks down. But in thinking about the nature of his courageous leadership, his refusal to be turned aside from his moral sense of destiny, he is enacting the image Jesus offers of the mother hen and her chicks. While gathering them under the protection of her wings she distracts the predator by exposing the vulnerability of her breast – which in the larger sense is the very image of God’s actions on the cross.

We all hope and pray that the courage of the Ukrainian people to confront the sacred violence being visited upon them will result in their victory – yet the odds remain stacked against them.  But the more important truth here is that Zelensky’s embodiment of Ukrainian fierce courage – a courage that also courts a terrible vulnerability – has already won a significant moral victory for humanity whatever the military outcome.

On the cross, God broke the power of sacred violence’s grip on the human heart. Jesus demonstrated that the repetition in the cycle of sacred violence is no longer inevitable – being now a matter of human choice. Something to bear in mind as we journey with him on his way to Jerusalem.