Although the parable does not have a clear concluding moral message, it nevertheless has a rub that chafes. The rub is – grace is never free. 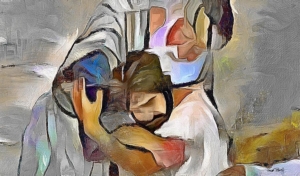 This week we have for the Gospel portion Luke’s parable of the Prodigal Son. Earlier in the week I was breathing a sigh of relief remembering that I had a sermon dating from 2013 on the Prodigal Son. But when I looked back I realized that I was hearing the text very differently from the way I heard it in 2013, when my focus was on the narcissism of the younger son. My starting point in 2020 was to reflect on the experience of parenting. Who among us does not know the experience of a wayward child? If that is too strong an expression at least we all know the pain and concerns felt when our children begin to chart courses in life very different from the ones we had anticipated for them – making decisions we would have wished they made differently?

Like all the parables of Jesus that only Luke records, this parable has always been a rich seedbed for profound mischaracterization. In the interests of full disclosure, I’m indebted to the Lutheran pastor and theologian Paul Neuchterlein – for his rich insights into this text.

Imagine, Jesus leaving the Synagogue after a lengthy discussion with the Pharisees following the Shabbat service. As he comes out into the street, he’s mobbed by a crowd who may have been loitering with intent to waylay the teacher outside the synagogue doors. In describing them as tax collectors and sinners, Luke is drawing our attention to the fact that these are the ritually unclean, those excluded from 1st-century Jewish worship. Unable to listen to Jesus debate with the Pharisees – they are eager to hear him, nevertheless. The Pharisees, following Jesus out of the synagogue begin to grumble behind him about the shameful way Jesus is comporting himself with the hoi poloi. Clearly aware of their grumbling Jesus begins to tell everyone a parable.

Parables were stories – the details of which were drawn from the ordinary everyday lives of the storyteller’s audience. They build a tension seemingly towards a familiar conclusion – only to at the last minute dramatically veer off into a completely unanticipated ending. This is the case in this parable. The father’s behavior towards is profligate – the meaning of prodigal – younger son is countercultural and not the conclusion anyone expected.

We can’t know with any certainty what ending the crowd outside the synagogue of Pharisees and sinners expected from this story. But we do know how subsequent interpretations have sought to reduce it to a rather simplistic morality tale about the wages of sin with strong patriarchal themes – namely, sex with prostitutes, disobedience to father and duty. The younger son in following his hedonistic desires comes -predictably – to a sticky end. He is forced to humiliate himself by going back home with his tail between his legs to beg his father’s forgiveness. You can hear the tut tutting down 2000 years of interpretation – be this a lesson for all you rebellious sons.

This rather traditional interpretation designed to support the patriarchal world view has largely remained silent on the elder son’s reactions to his brother’s return. It’s also conflicted on father’s response. The father – having daily pined for his son has kept a continual watch in the hope of his return. In this sense he seems to behave more like a mother than a father – an insight Neuchterlein suggests in one of his sermons on this text.

This parable offends against the patriarchal tradition which emphasizes the virtues of obedience and duty to strict fatherly rule and the honoring the first born over the younger. Thus it does not know what to do with Jesus’ portrayal of elder son – who is outwardly compliant but inwardly deeply contemptuous of his father’s response to his wayward brother’s return. Being dutiful and hard working on the family estate seems to have bred only envious resentment in him. In confronting his father, he refers to his brother, not as my brother but as this son of yours – aptly articulating his anger towards both.

The patriarchal reading of this story is likewise conflicted on how to picture the father – whose indulgent generosity flies in the face of conventional inheritance custom. This is bad enough, but his willingness to take his son back – holding him seemingly unaccountable for his profligate ways smacks of more than a little moral weakness on his part.

Reading this story through the filter of patriarchal relations is only one of the two main ways this parable has been misconstrued.  The other has been to read it through the filter of antisemitism. The father is God. The elder son is the Jews. The younger son the Christians. We can all see where this reading is headed.

If Jesus were standing in this pulpit, orienting himself to our 21st century mindset he might ask us:  so who do you identify with in this story? This is not simply an individual question it also has wider social-relations implication -as in – which identity do we inhabit within the social structures of 21st century American life? As middle-class white folk –dutiful, obedient, hardworking, and schooled in the virtues of delayed gratification, I imagine few of us identify with the headstrong younger son and his deeply countercultural choices – unless we do so secretly – which tells a story in itself.

It’s likely we believe that the prodigal’s decisions have been – to say the least – misguided, but how do we feel about the father’s non-judgmental and seemingly uncritical response to his son’s return? How do we account for his disinterest in holding him to account? He not only fails to call his son to account he throwing caution and financial prudence to the winds – giving completely the wrong signal he rewards him with a lavish party?

Of course, this parable is a story about God, whom Jesus portrays as an noncritical and non-judgmental father – recklessly generous; indiscriminate between worthy and unworthy recipients of his love – always keeping a watchful eye out for his wayward children’s return – and treating such return as the occasion for a celebration of new life.

Yet, I want to draw our attention to the parable’s conclusion. What do you conclude from hearing this story? Whatever you do conclude you will be wrong for this parable has no conclusion – a skillful teaching ploy on Jesus’ part.

The parable operates at two levels. In the setting of its telling – the street outside the synagogue – the Pharisees can be depicted as the sincerely religious; men of real integrity and longing to know and love God more. Yet, their ability to be sincere in their spiritual quest is a product of their privileged social and economic status. In debate with Jesus, they are intrigued but remain cautious for they feel that they have much to lose by the wrong decision. They want to know what the right path is before they commit to following it. Contrastingly, it’s those whose occupation or lack of one excludes them from the promise who have nothing to lose and who seem open to, and excited by, the invitation implicit in this parable.

We don’t know if the elder son did eventually swallow his hurt pride and join the feast – the parable leaves this both unclear and also a possibility for the father’s invitation remains open ended.

Although the parable does not have a clear concluding moral message, it nevertheless has a rub that chafes. The rub is – grace is never free. Oh, it’s offered freely by God and there is no pre qualification required to receive its invitation. The offer is free, the acceptance is costly. As elder son – what would it cost us to relinquish our resentment and go in to the feast? As the younger son – what has it cost us to return home, humiliated?

The younger son knows that the grace of the father’s undying love is costly. Like him, the crowds outside the synagogue know that grace is costly. As the socially marginalized and religiously excluded they’ve already paid its price.

Like the father in this parable, which among us does not know the cost of unconditional, nonjudgmental love? Which among us has not suffered the pain of watching our children chart different life trajectories that inevitably lead to painful and unsuccessful outcomes? We know that like grace, love is not free, it exacts its own cost.