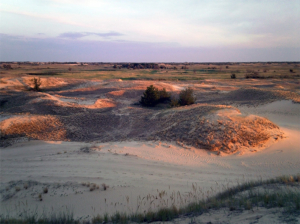 If the conversations I’ve had lately are any indication, fear is the elephant in the room today. In the past week and a half I’ve listened to people who are afraid, especially about the horrific situation in the Ukraine. Whether whistling through the graveyard with gallows humor or stating it outright, people are fearful for the future; for our children’s future. Fear and anxiety are the undercurrents of our days and the monsters under the bed at night. It feels as though humanity itself is going off the rails.

As we come together on this first Sunday in Lent, the questions, therefore, are big ones: Where is God in this? What does it mean to be human and what are we called to do in these days of war and uncertainty?

returned from the Jordan.
He was driven,
in the breath,

in the wordless wilderness,

days,
forty.
He was examined by the slanderer.

The Gospel translations of Richard Swanson are always a little jarring, but not in a bad way. Swanson hews closely to the original Greek, to the point that you almost feel as though you’re looking at raw linguistic data—the Gospel before it was tamed by King James. Swanson has stripped the prose from the familiar narrative, and left only the poetry.

“…full of breath holy…driven in the breath…” Here the Holy Spirit ceases to be a complex theological construct and becomes visceral, filling the body and at the same time blowing it forward; warm, intimate, and insistent.

“…in the wordless wilderness…” The Word of God himself, driven into wordlessness—solitude and silence, for forty days. Not the kind of silence that is comforting and comfortable. This silence is assessing, evaluative, judging.

“…he was examined by the Slanderer.” Swanson sees the devil here in the tradition of the Book of Job—as a member of the heavenly court who roams to and fro about the earth inspecting and evaluating the integrity of God’s creation. Swanson calls him a “Cosmic Building Inspector,” but with a mean streak. This is a Slanderer who has been given the task of examining this prospective Messiah to see how he’ll measure up, and he has no intention of making it easy.

This isn’t about temptation and enticement. It’s a qualifying examination. The wordless wilderness is a combination of classroom and battleground: Jesus vs. Slanderer. The Word of God vs. the Speaker of Falsehoods.

Jesus has just been baptized in the Jordan. He has been claimed by God as Beloved Son, and his ministry and fate lie ahead of him. How does this encounter prepare Jesus for what he will face in the next three years?

We often think of this episode as revealing more about Jesus’ divinity as he goes toe to toe with the devil and zings him with perfectly chosen scripture passages. This perspective would show us the Jesus who knows the truth of what the devil is saying, but chooses not to give in to the temptation to exercise his power. But as I said, this isn’t about temptation. Jesus’ task here is not to pass a qualification exam about his divinity, but to show that he knows what it is to be human. Because this Messiah who will turn the world right-side-up by turning it upside-down needs to show that he has the bona fides to stand, not just toe to toe with the devil, but side by side with his fellow children of God.

In the first part of the examination Jesus is shown a stone and told to turn it into bread. He is confronted with the very human quandary of wants versus needs—our tendency to want what we want when we want it. But what is the true nature of our hunger? What compulsions and addictions mask the fact that we are trying to fill deeper unacknowledged needs with material wants?

He answered to him, Joshua did: It stands written: Not on bread only will a person live.

To be human is to acknowledge our hunger for God—a longing that cannot be met through quick “life hacks” and the latest iPhone.

Part Two of the examination is more subtle. The Slanderer shows Jesus the kingdoms of the world:

He said to him, the slanderer did: to you I will give this authority, all this and all their glory, because to me it has been handed over and to whom I choose/wish I give it.

This is customarily understood as the temptation of power, but it also presents Jesus with a compelling test of something else: Veracity. The Slanderer states with authority that all the kingdoms of the earth have been given to him. Really?? Is this something the God who created everything and called it good would really do?  No. And yet whenever I’ve heard this story I’ve never once thought to evaluate the truth of this statement until now. The Slanderer makes it sound true, but as we have sadly discovered, it is possible to make lies sound like the truth if you tell people what they want to hear and speak with the veneer of authority.

But Jesus calls the lie the lie. He tells the Slanderer, “God is God, and you are not.”

To be human is to know the challenge of discerning truth from falsehood; to be regularly faced with the ethical/moral questions of power, justice and fairness. What are the ends and the means in our lives and in society? How do we negotiate the fine and bright lines that present themselves every day, remembering that we become what we worship?

Part Three of the examination is the hardest, because it goes straight to the heart of Jesus’ ministry and fate.

He drove him into Jerusalem; he stood him on the peak of the Temple. He said to him: Since son you are, son of Elohim, throw yourself from here down.

Swanson writes, “Jesus is given the opportunity to claim an exemption to the limitations that make human life dangerous. If we fall, we break hips, or shatter wrists. The law of gravity serves as a metaphor for our fragility, our mortality. We suffer pain, we break, and we can be killed. Jesus has just been offered a chance to be above all that. He refuses… The task of turning Creation right-side-up will not be carried out by a messiah who can fly, or glow in the dark, or rise above pain and mortality.”

Luke wrote his Gospel in the aftermath of the First Jewish Revolt against Rome, beginning in the year 66. According to ancient sources it resulted in the death of a million Jews. Luke presented to his first century audience a Messiah who stood with and among the broken and the grieving. Luke wanted them to know that in order to stand among the broken, Jesus was willing to be vulnerable and breakable himself.

To be human is to be breakable. To be a human who follows the way of Jesus is to be willing to let our very hearts be breakable—to be broken open by the pain of another.

On this first Sunday in Lent, in these fearful and fearsome days when it seems that humanity has gone completely off the rails, we may well be wondering what it means to be human. It is indeed a temptation to let fear and despair define us. But that would be letting the Slanderer control the narrative. Fear and despair don’t need to define us. Jesus offers us a different narrative– of bread and wine to feed and nourish our famished souls; of courage and perseverance to speak God’s truth of dignity and justice; and of love and compassion to be God’s hands of prayer and healing for the pain of the world. This is the narrative that Jesus calls us to hear in this season of Lent and as he stands with us and all who are breakable and broken in these anxious days and sleepless nights.

Defenceless under the night
Our world in stupor lies;
Yet, dotted everywhere,
Ironic points of light
Flash out wherever the Just
Exchange their messages:
May I, composed like them
Of Eros and of dust,
Beleaguered by the same
Negation and despair,
Show an affirming flame.

In the wilderness of our fear, let us pray to be light.