Reading Between The lines

Brancusi, Constantin, Bird in Space. The Guggenheim Museums and Foundation

And then he snapped. Gentle correction apparently hadn’t worked, so it was time for millstones, mutilation, and hellfire. 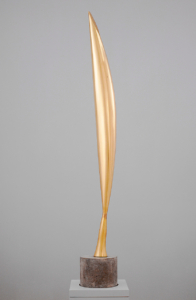 Believe it or not, the 1970’s TV show, Little House on the Prairie, referenced this text in a dramatic episode in which Ma Ingalls, feverish with an infection from an untreated cut, opens her Bible, reads these words, and prepares to amputate her own leg. Fortunately Pa Ingalls and Doc Baker arrive in time to save the day and all is well in the end, but not before giving the viewing public—including impressionable children– a prime example of the dangers of using scripture as a first-aid manual.

The vivid imagery of this passage from Mark’s Gospel leaves us with a lot of questions, not the least of which is, how do we read these words of violence from Jesus? What has caused this seeming about-face from tolerance and forbearance at the beginning of the passage to this judgmental tirade? While we definitely don’t want to employ the Ma Ingalls hermeneutic on this reading, is the only alternative to ignore Jesus’ words and pretend he didn’t mean what he said? This may make us more comfortable, but doesn’t it let Jesus and the Evangelist off the hook?

Many questions are before us as this story confronts us on Homecoming Sunday 2021.

I had a professor in college who taught a profound lesson about looking at modern art. His example was a sculpture by Constantin Brancusi called Bird in Space. Professor Dixon showed us a slide of a polished bronze vertical sweep of metal that tapered at each end. It was lovely and shiny…but it didn’t look at all like a bird. We sat there, looking and looking, and thinking of the title, Bird in Space, but we could not see a bird for the life of us. Finally Professor Dixon said, “It’s not about the bird. It’s about the flight.” And then we could see it. By ceasing to focus exclusively on the materiality of the work—the bronze, the shape, the lack of feathers and wings, the trying to make it fit with what we viscerally wanted to experience as a bird—suddenly we could see the movement, the gesture of the piece. But first we needed to change how we saw it; by looking around and through, by looking at the space around it—then we could see the swoosh—and it took flight.

Can we do the same thing with this Gospel story? Let’s look at the basics of the passage, and then let’s see if it can fly.

First—and the most important lesson Ma Ingalls forgot—look around the passage, at its context. Jesus and his disciples were on the way to Jerusalem. In last week’s reading he tried to explain that he was to suffer, die, and rise again, and the disciples didn’t get it. As they went along he heard them muttering among themselves and got them to admit that they had been arguing with one another about who was the greatest. His frustration beginning to simmer, he chastised them, saying that whoever would be the first must be last and servant of all, and picking up a child, said that anyone who welcomes one such as this little one welcomes Jesus himself.

That was last week.

In the reading for this morning, it’s really as though the disciples hadn’t even listened to anything Jesus had said about humility and service. In the very next breath John effectively tattled on someone—an outsider to their group—who dared to cast out demons in Jesus’ name. Jesus’ initial response was one of tolerance and inclusion; declaring that those who act in compassion for others are not to be treated as outsiders. The Dream of God belongs to all who do the work of the Kingdom—it isn’t a matter of who is out or in—it’s a matter of serving those in need without exception.

And then he snapped. Gentle correction apparently hadn’t worked, so it was time for millstones, mutilation, and hellfire.

First century Jewish beliefs about the afterlife are hard to pin down—there was a spectrum. While some Jews believed in an afterlife, many didn’t. Generally they believed that when the breath left the body, that was it—life was over. The concept of eternal punishment was not unheard-of, but it was generally a fringe idea. The psalms do speak of Sheol—the Pit, and many scholars have referred to Gehenna–from which the word “hell” in this passage was first translated in the King James Bible–as a forsaken valley outside of Jerusalem. But it’s impossible to know for sure where on the spectrum Jesus’ or Mark’s audience fell. The fact remains that we can only speculate. But as we speculate and wonder and try to pin it all down, are we focusing too much on searching for wings and feathers? The point is that we need to accept the fact that this is what Mark wants us to hear from Jesus. When he heaves these verbal hand grenades, we are challenged to hear his words and not to give him a pass. Jesus means what he says, but what does he mean? As with Brancusi’s sculpture, what are we invited and challenged to hear within and around these intentionally frightening images?

What is Jesus saying between the lines?

When Jesus presents me with unquenchable fire I crave cool healing balm. When he threatens me with drowning I breathe deeply of the air that I fear will run out. When he tells me I must lose my hand, my foot, my eye, I reflexively hold them closer to protect them.

When Jesus threatens us with incompleteness we automatically yearn for fullness and healing.

Jesus was responding to those in his community who would quarrel among each other about who was the greatest. Those who would exclude others from their inner circle. Those who would threaten the spiritual well being of both the chronologically youngest, and the youngest in the faith. Jesus knew that all of these things threatened the wholeness of the faith community, and in doing so they threatened the very Dream of God. Which he felt worth the expense of some serious rhetorical ammunition, for those with eyes to see and ears to hear.

On this Homecoming Sunday, a day of return and renewal, how do we envision wholeness as a community, especially since the pandemic has challenged our efforts to return to what we used to experience as a normal program year? We’ve been going along in fits and starts for a long time—meeting inside, outside, livestream and hybrid; masks on, masks off, masks on again; zoom, in-person, back to zoom. But in spite of the whiplash there is much to celebrate in having not only weathered, but in some ways thrived in the storms of the past months. So now how do we take what we’ve learned through both gains and losses and weave that into Jesus’ emphatic and very serious invitation to wholeness?

We’re called to widen our circle to include the stranger and seek justice for the marginalized. What does that look like now, and what might it look like for us in the coming year? We’re called to broaden our vision of ministry and be open to new opportunities and partnerships for healing and service. What will that look like? We’re called to deepen our journey of faith through prayer and worship, through cultivating our sense of awe and mystery in every aspect of our lives, and by making a practice of mutual vulnerability, humility, and true listening. This is because wholeness encompasses all of life, including times of suffering and challenge. The more we can draw from our spiritual well, the more we can offer to each other the water of comfort and compassion in times of loss and struggle, and the cup of celebration in times of joy.

Widening our circle, broadening our ministry, deepening our spiritual well.

What will all of this look like? How can our relationships within, around, and between our communities—family, church, and civic–become beacons of wholeness in the coming year?

With God’s help, let’s take the challenge. And take flight.