We somehow think that places and situations of hopelessness and despair somehow disprove the idea of resurrection. “How can this possibly be?” we ask, as we grieve the brutality in Ukraine and cruelty and injustice throughout the world. 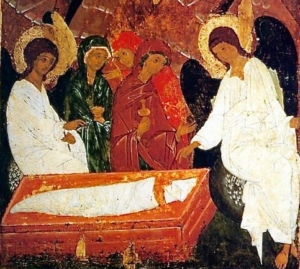 The morning was silent as the women disciples approached the tomb at first light with their burdens of spices. It wasn’t the first time they had prepared a body; this is what people did for each other in the community. It was part of the cycle of caring for one’s neighbors throughout their lives, from the joy of wrapping a new child in swaddling cloths to the grief of wrapping a body in its linen shroud. These were the tender rituals that knit families and neighbors together; the bonds of love and care that made the hardest of times more hopeful and bearable.

As we watch this scene unfold, we risk falling into a trap; a natural trap for anyone who knows how a story ends. The trap is that we tame the story by lessening its immediacy and spontaneity. And when we tame this story in particular, we mute its impact– the impact of the resurrection. And when we do that, we risk losing sight of our identity as Christians and as People of Resurrection. So, in order to avoid this trap, we need, for a moment, not to suspend disbelief, but to suspend belief—to let go for a moment of everything we have heard and believed about God and Jesus through the Gospels, and come at it with a blank slate—so that we can witness more authentically to the joy and the power of this Easter day.

How to do this? First, we place ourselves in the shoes of the Evangelist’s original audience, a short ten years after the siege and destruction of Jerusalem by the Romans in the year 70 C.E.—with the devastation of the city and the Temple within people’s living memory, the way we might experience our own memories of 9/11. Now think how closely Luke’s readers would identify with the experience of Jesus and his followers under Roman occupation: They, too, knew the presence of Roman soldiers in their communities. They also knew first-hand the brutality of crucifixion for those who committed crimes against the Empire. For them, the promise of the resurrection—again, for many an event that had taken place only decades previously—the promise of resurrection, not only as the fulfillment of prophetic hope, but as an act of defiance for all of God’s people against Empire– was still fresh.

God’s fingerprints were still warm on this act of salvation and redemption.

Now, revisit the story with these new eyes. Suspend belief, and witness as it unfolds. See the grieving women enter the tomb, seeking the tortured body of Jesus and finding no one. Hear again Luke’s word, “perplexed” in this new context. Let the sudden radiance of angels blind you in empty darkness. Now see the women fall to the ground, breathless and distraught. Hear again the word, “terrified.”

Now, hear the silence of the tomb shattered: “He is not here, but has risen.”

Resurrection. There is no taming that. This was a glorious and definitive act of God–beyond human control, expectation, and comprehension–that turned the world upside down. Because resurrection comes even when we think it is impossible. It comes in spite of despair and fear and disbelief. Perhaps, given the historical context in which Jesus’ resurrection took place and in which it was first communicated, it is better to say that resurrection comes especially when it seems most hopeless. I wonder if those of us who are privileged and comfortable have a hard time understanding this. We somehow think that places and situations of hopelessness and despair somehow disprove the idea of resurrection. “How can this possibly be?” we ask, as we grieve the brutality in Ukraine and cruelty and injustice throughout the world. But resurrection isn’t something that is proved or delineated. To try to delineate where resurrection is possible and where it isn’t is to make God too small. Resurrection is not defined or confined. It is witnessed.

I speak of resurrection in past and present tense because it was/is not just one event. The resurrection of Jesus was a singular death-shattering act of God, but it is also a mirror of the way Creation has worked from the beginning of time, from galaxies to microorganisms, in ever flowing cycles of life, death, and renewal. And as we live into these realities—the reality of Jesus’ resurrection and the cyclical reality of Creation, we are called into our identity—as People of Resurrection.

“Remember how he told you, while he was still in Galilee, that the Son of Man must be handed over to sinners, and be crucified, and on the third day rise again.”

The resurrection, though a singular act of God, was rooted in earthly existence. The angels said to the women disciples, “Remember?” Remember how he was with you for years, teaching, healing, eating, drinking, praying? Remember how he was one of you—how he grumbled at your occasional cluelessness, chastised his mother at Cana, and wept for Lazarus? Remember how he told you that he knew that proclaiming the Dream of God in the face of Empire would cost him his life? Jesus shared the human condition completely, even to the point of becoming a victim of human sinfulness and brutality. Because the path to resurrection leads through the Cross.

And they remembered. Mary Magdalene, Joanna, Mary the mother of James, and the other women who had been with Jesus since Galilee. They remembered, and in remembering, they witnessed. Unexpected and unlooked-for, yet it happened in the silence of that morning; in the middle of their despair, in the middle of the worst that Rome could throw at them. Resurrection came.

Given our suspension of belief, is it really a surprise that the men didn’t believe the women—that they dismissed their news as what one translator has called, “women’s trinkets”? What would we do if someone approached us in a state of high excitement and euphoria with news of the impossible? We would probably pigeonhole them as raving and unstable in the same way the men disciples did to the women. So, it may be irritating, but it’s not completely unreasonable.

That being said, the very nature of Luke’s account allows for the possibility that the women would have continued proclaiming the news even as Peter, the only one of the eleven to fan a flicker of hope, ran to the tomb to verify what the women had said. He didn’t immediately run off to proclaim the news, though; he went home, shaking his head in hopeful amazement. But somehow the word continued to spread. I choose to hope that the women did not let the other disciples’ disbelief silence them. After all, they knew what they had seen, and remembered what they had been told by Jesus. They believed, and they witnessed. Which is what we are called to do.

We are called proclaim the truth of resurrection; that it stands against despair, and hopelessness, and against every cruel, unjust, and hateful thing humans can invent to do to one another. God calls and challenges us, as People of Resurrection, to speak this truth to the world, to call out hope wherever we see it, even in the most hopeless of places: In a smoke- and bullet-filled New York subway car as an injured man shields a pregnant woman, and others provide first aid to fellow passengers. In the resolute face of Volodymyr Zelensky, whose tired eyes still radiate love and pride for the courageous and defiant citizens of his country. And even in the ashes of Bucha, where neighbors embrace and comfort one another in their grief, engaging in the tender rituals of mourning and helping each other begin to pick up the pieces of their lives.

Glimmers of light in the darkness show us that hope and renewal persist even in places that we deem unlikely. But nothing is unlikely for God. Hope persists. Love persists. And where there is love and hope, there is resurrection. Seek it everywhere. Witness it when you find it. And then proclaim it to the world (even if the world doesn’t believe you at first.) Alleluia, Christ is risen! The Lord is risen indeed, Alleluia!