Live Streaming of the 10am Service

Abstract:  We catch our breath as we’ve been propelled through the first chapter – having moved from the majestic opening of the prologue – words conjuring up images worthy of any Star Trek movie – to finding ourselves on the planet’s surface -so to speak – watching God’s only son coming and going among the local inhabitants – calling this one and then these ones, before arriving at the most domestic of all scenes – a local small town wedding where there seems to be a problem about the wine. 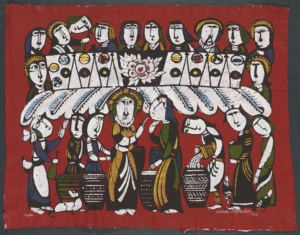 The gospel according to John proceeds through its first chapter at a breathless pace. The writer whom we know as John the Evangelist – who while not John the Beloved Disciple is someone who may have known John personally. He is the one who records and passes-on the unique teaching tradition of the Beloved Disciple – a teaching tradition that had remained distinct from the mainstream apostolic tradition recorded in the synoptic gospels of Mark, Matthew, and Luke.

Feel the pace of the narrative. Chapter 1: 29 we read: The next day Jesus appears before John for baptism. Then again at verse 35: The next day – Andrew, one of men who witnessed the baptism followed Jesus and introduced his brother Simon to Jesus. Verse 43 opens with again: The next day –Philip enters the picture and follows Jesus. Philip finds Nathaniel and announces the joy of his discovery – we have found him about whom Moses wrote, Jesus, from Nazareth – to which Nathaniel, ever the whit replies: can anything good come out of Nazareth?

Day one, day two, day three – a symbolic sequence for John who from the outset wants us to be aware of how the story ends – Jesus’ final three days. John’s  schema is captured by T.S Eliot: The end is where we start from. Every phrase and every sentence is an end and a beginning. Chapter 2 opens with: On the third day there was a wedding in Cana of Galilee, and the mother of Jesus was there. Jesus and his disciples had also been invited.

We catch our breath as we’ve been propelled through the first chapter – having moved from the majestic opening of the prologue – words conjuring up images worthy of any Star Trek movie – to finding ourselves on the planet’s surface -so to speak – watching God’s only son coming and going among the local inhabitants – calling this one and then these ones, before arriving at the most domestic of all scenes – a local small town wedding where there seems to be a problem about the wine.

The first part of John’s Gospel is also known as the Book of Signs. Rather than following the chronological narrative of Jesus birth and life followed by Matthew and Luke according to the blueprint established by Mark, after locating Jesus ‘ identity as the pre-existing Word – the logos – the communicative element of the divine nature – John proceeds to build his Jesus narrative around seven signs – each designed to demonstrate and confirm Jesus’ divine origin and purpose.

There are seven signs in all beginning with:

John’s sign stories certainly contain inexplicable-miraculous happenings. But to get into a debate about whether miracles as supernatural events happen or not is to miss John’s purpose. Signs always have the function of pointing beyond themselves to something greater. We are in the season after the Epiphany and John intends to draw our attention to a rolling sequence of epiphanies – a Greek word meaning showings that reveal to the disciples an inner truth about Jesus’ divine identity and purpose – truth accessible only through the medium of faith.

The Wedding at Cana is a favorite text at weddings. It’s noted in the Preamble to the wedding service in the Book of Common Prayer that Jesus was present at this wedding event – seemingly an indication of God’s valuing of lifelong marriage as a reflection of relational love shared within the divine community.

The story has some other interesting features.

Christian commentators have seen in the transformation of the contents in the huge stone jars of water reserved for ritual purification into wine as a sign of Jesus abrogating the old law of the Mosaic Covenant. A better interpretation of this is that water used to delineate the boundaries of ritual purity – a form of exclusion –now becomes the wine of welcome and inclusion.

Who is the audience witnessing this first sign? Only Mary and the disciples witness and understand what Jesus has done. No one else at the wedding has any inkling – which causes the steward of the celebration to exclaim wonderment at why the groom has broken with common sense and custom and served the best wine last after everyone is well on the way to being drunk.

Down the centuries, the more Puritan in the Christian community have felt perplexed that John should report a wedding event as the first sign of the kingdom. After all, a wedding where the main thrust of the narrative revolves around the quantity and quality of the wine- seems a somewhat trivial if not unworthy image for the coming of the kingdom.

Others, however, have welcomed and been affirmed by John presenting Jesus at a wedding as the setting for the first of his signs that the kingdom has come. It’s reassuring that Jesus seems to have enjoyed parties – and that occasions of joy and merriment involving eating and drinking reveal a great deal about the nature of God’s kingdom – as a place of abundance in the form of the good things of life – wine and food, celebration of love, drunken bonhomie – symbolizing the goodness of creation.

This story of the Wedding at Cana is unique to John. There is no overlap here with the synoptic tradition. Nevertheless, my question this morning is how do we hear the first of John’s signs of the kingdom as a 21st-century audience?

In the short term, receiving this story finds us in a place of need. Into the third year of a global pandemic amidst the heedless head-long rush towards an ecological cliff, we have a need to see God’s invitation to faith as an invitation to celebrate social joys. This is more important now after three years of on-and-off quarantine that has left us not simply yearning for a return to our previous enjoyment of social life, but more worryingly, has now instilled in us a reticence – a wariness of social situations that may not so easily dissipate with the end to the COVID emergency. The Wedding at Cana reminds us of the essential nature of social celebration – something not only essential for human wellbeing but also a central manifestation of God’s intention for the world.

Over the longer view we hear the first of John’s signs of the kingdom as a 21st-century audience by being reminded of the importance of seeing the world through an active faith lens. For many of us this is a tall even risky ask. Whether Andrew, Simon, Philip, and Nathaniel had a greater imaginative acceptance of the miraculous that we have – or not – we are not privileged to their 1st-century mindset – they were changed as they witnessed in Jesus the quiet and unseen way divine action in the world comes about.

Like them, we are hungry to be changed and yet remain fearful of change. This is a balancing act and so what is needed to tip the balance on this scale? The disciples hunger led them to begin to trust Jesus enough to follow him. Now he rewards them with this first in a series of signs. They will go on the experience seven signs yet one sign is enough to completely rewire their whole world view.

What we call reality is never real – reality is only the way we see things. Our current worldview lens equips us to see some things – usually the bad things -while remaining blind to others – usually the good things – chief among them the quiet and unseen ways divine action in the world comes about to break open the dead shell of yesterdays – to equip us to do what we came here for and waste our hearts on fear no more (John O’Donohue). Food for thought – no?