The mutuality of love ricochets within the divine community before radiating outwards as the energy – the metaphorical raw material for creation. We are made as relationship seeking creatures – discovering our personhood in relationship with others. The Trinity not only whispers to us through the Scriptures and through the DNA of our human nature. What do we hear whispered? That to live lives of mutual love through relationships – is to be most like God. 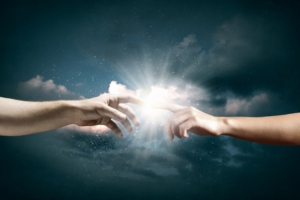 The Bible may not explicitly speak of God as a trinity – a divine community, but Christian experience of God became fundamentally contoured by it. We find the Trinity whispering to us through the Scriptures.

The Trinity means a lot to Episcopalian-Anglicans. I mean – who knew? My first sermon at St Martin’s was on Trinity Sunday in 2014. I preach on this anniversary each year with a sense of the poignancy of the Trinity lying at the heart of my love for this community.

Despite its popularity as the dedication for many of Episcopal-Anglican churches – the Trinity is poorly understood if not downright incomprehensible to most of us. Even the Lectionary struggles with suitable readings for The Trinity because – yes you guessed it – there is no explicit mention of The Trinity in the Bible – although John’s Prologue and Genesis 1 hint at it.  We find the clearest statement of the Trinity of God in the Nicene Creed – so in other words – clear as mud to most of us.

Despite the incredulity of our Jewish and Muslim neighbors, we Christians believe that God is one. It’s just that for us the one God is a divine community and not a solitary being. How do we know that God is community and not solitary? We know it through our experience of God. We know that God is the creator – the source of all that is. We also know that in Jesus, God the Creator entered underneath the tent of creation – showing us that in a human face and in a human life – all that is essential to know about God is revealed to us. We know through the indwelling of the Spirit of God – the Holy Spirit – the divine energy’s infiltration of everything in creation. We are saturated with the inflation of the Holy Spirit, whom the first Christians clearly associated as the Spirit of the risen Christ – empowering them to collaborate with God in the ongoing healing of the world.

Our gospel for Trinity Sunday comes from John 16. At verse 12 we encounter a very significant sentence in which Jesus explains to his disciples that there remains much he does not have time to explain to them. He recognizes that they have already had their worldview blown open – consequently they have no bandwidth for more. But Jesus goes on to make them a promise. He tells them that when the Spirit of truth comes, they will be guided into all truth.

The Bible may not explicitly speak of God as a trinity – a divine community, but Christian experience of God became fundamentally contoured by it. At the heart of their experience of God they were guided into further understanding – a process gathering momentum until by the 4th-century Christians were ready to give expression to their fundamental experience of God in the Nicene statement.

At the heart of our understanding of God is the wonder of relationship. This relationship has been traditionally referred to in the gendered terms of father, son, and spirit – the spirit carrying the male pronoun he/his. But gender here is a red herring. At the heart of the traditional language of the Trinity is the notion of relationality. Taking relationship to be the essence of Trinitarian language, today we can avoid the gendered overtones by referring to God as lover, beloved, and love-sharer. Relationship not gender is the key characteristic that identifies the Christian experience of God.

The Christian experience of God as divine community whispers to us through the Scriptures where we find in Genesis the extraordinary statement Let US make humanity, in OUR own image. And so, it was – humanity, male and female, fashioned in the divine image.

This divine image lies at the center of our human experience. Our modern development of a psychologically informed understandings of human nature identifies us as relationship seeking beings. From the first moments when the newborn reaches for the mother’s breast – the impulse for connection – relational seeking – can be witnessed. All therapeutic work – regardless of theoretical school has a single aim – to repair our broken experience of relationship by equipping us with more successful skills in future relationship seeking.

In Western art the Trinity has been largely depicted diagrammatically as a triangle or as overlapping or concentric circles without beginning or ending. The eye follows towards the completion of the circle only to find itself back at the beginning.

Western depictions of the Trinitarian nature of God depict the divine unity but miss the essential truth that God is relational and communal. It is to the Eastern Christian Tradition of Orthodoxy with its deeply mystical-devotion to the Trinity that we find the most complete depiction of the essential nature of God. This is a picture not for the mind, but for the heart.

Rublev’s famous depiction of the Trinity as three identical persons, lovingly gazing upon one another reflects the conversation about human creation we hear in the first chapter of Genesis. In Rublev’s icon we see three individuals, but our eye is drawn to their essential oneness – for in the face of each, reflects the faces of the other two. Rublev’s icon is the fruit of his prayerful heart’s enthrallment in the endless mutual gaze of divine love.

Contrary to modern depictions of self-discovery as an internally driven, autonomous process, we discover who we truly are reflected in the gaze of another looking back at us. The newborn experiences itself firstly through finding itself reflected in the mother’s face as she lovingly gazes upon her infant’s face – flooding its developing senses with the hormones of wellbeing.

Jesus tells us that we will continue to be guided into all truth. In 14th-century Moscow, Andrei Rublev was guided by the Spirit into all truth. His was not a truth of the mind but of revelation of the heart – an enthrallment in the mutual gaze of divine love – leading him to depict each of his three faces absorbing and reflecting one another.

The mutuality of love ricochets within the divine community before radiating outwards as the energy – the metaphysical -metaphorical raw material for creation. We are made as relationship seeking creatures – discovering our personhood in relationship with others. The Trinity not only whispers to us through the Scriptures but echoes in the DNA of our human nature. What is the whisper? What is the reverb echo?

That to live lives of mutual love through relationship – is to be most like God.