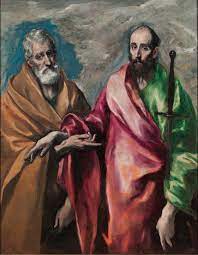 Part of the beauty of the post-resurrection stories that we hear in the weeks after Easter is their immediacy and intimacy; the way in which we are drawn viscerally and emotionally into these encounters between the risen Christ and the followers of his Way. Our Lectionary reinforces this feeling of immersion into the post-resurrection world by offering additional New Testament lessons during the Easter Season. Instead of passages from the Hebrew Bible, our first readings for the next few weeks will be from Luke’s Acts of the Apostles. This reinforces the power of the Easter message; that it was not just a single event, but an ongoing Holy Spirit-guided process that transformed hearts, lives, and communities as it spread throughout the known world. And for those with eyes to see and ears to hear, it’s a process that continues to this moment. The Easter light shines brightly in these 50 days (36 left)—perhaps all the more brightly in an anxious world. And the stories that we hear are an invitation and challenge to become part of this transformational process—a movement seeking to realize God’s Dream for Creation.

Perhaps you are thinking, “It sounds like the two different preachers for this week and last week are saying pretty much the same thing.” That’s because we are. And the message lies essentially in this question—actually two questions: If Easter is the death-shattering, life-affirming force that we celebrate in this season, how do we live into that reality? And are we ready to let God form us to do the work that is ours to do?

This morning’s stories, from Acts and from John’s Gospel, are a vivid convergence of two close encounters with Jesus, both of which have something to offer in response to these questions. Saul (later named Paul) and Peter come effectively face-to face, not only with Jesus, but with their own worst moments in their relationship with him. And in the spirit of the saying that no one is as bad as the worst thing they have done, the authors of these accounts wrote with the specific intention of rehabilitating their subjects.

In the case of Saul, Luke was aware that he was a member of the Temple hierarchy who had breathed “threats and murder against the disciples of the Lord.” He also knew about the stoning of Steven for blasphemy: As the executioners picked up their stones, they first laid their coats at the feet of a young man named Saul, who stood by and did nothing to stop the bloodshed. So, as Ananias observed in today’s story, Saul had a notorious reputation among the followers of The Way of Jesus.

Doing a little calendar math, Paul wrote his epistles, which are major blocks in the foundation of Christian theology, in the middle of the first century, around 50-60 at the earliest. Luke, writing about thirty years later, arguably would have wanted to do what he could to assist Paul’s reputation as an Apostle even though he had not known Jesus personally aside from this mystical meeting on the Damascus Road. The story of his transformational encounter with Jesus –with witnesses–would be an important reference, particularly since it served to verify Paul’s own account of the episode in his letter to the Galatians.

The writer of the 21st chapter of John’s Gospel had a similar intention. Chapter 21 is actually a later addition; the original Gospel account ends with the story of Thomas that we heard last week, with this conclusion: “Now Jesus did many other signs in the presence of his disciples, which are not written in this book. But these are written so that you may come to believe that Jesus is the Messiah, the Son of God, and that through believing you may have life in his name.” The end. Oh, but wait, there’s more…  So, this chapter is essentially a later epilogue, the writer’s desire being that the last thing we remember about Peter not be his shame and grief at betraying his friend three times, or his skepticism at the news of Jesus’ resurrection, but rather an image of hope for the future: “Feed my lambs.” Like Luke, the writer of John’s Gospel was probably aware of Peter’s influential position in the fledgling church and wanted to help establish his reputation by articulating his God-given call to ministry and leadership.

You may call this Biblical “spin.” It wouldn’t be the only example. But one person’s spin is another’s persuasive rhetoric. The important question here is, what do we do with it? How do these stories speak to us?

We see two men confronted by their failures, their own worst selves, in the presence of God.

“Saul, Saul, why do you persecute me?”

“Peter, do you love me more than these? Do you? Do you, really?”

Looking in the mirror. Facing judgment.

And then, receiving forgiveness. Imagine seeing the face of failure in the mirror suddenly transform into the loving gaze of Jesus.

This is the story that Luke and John offer us—one of judgment and forgiveness. Which is important spiritually and theologically, but it is only the beginning of the rich invitation that God extends to us as People of Resurrection. Note that these post-resurrection  appearances to Saul and Peter, like all of the other resurrection stories, do not stop at the personal one-on-one level. And this is a trap that we can fall into—thinking that these encounters with Jesus, and frankly, that our entire spiritual journey, is just about me. My spiritual life, my relationship with God/Jesus/the Spirit, my journey. The danger of the beauty and vividness of these resurrection stories is that we are drawn in by their intimacy and immediacy, and then think that the only authentic spiritual experience is some kind of a Damascus Road or mountaintop encounter. This is what I call competing in spiritual olympics. Not everybody gets a Damascus Road breakfast on the beach, and that’s really okay. It isn’t necessary to have one in order to be a good Christian. It may seem counterintuitive, but our spiritual lives are not about us.  A relationship with the risen Christ is only about us in that is also about how we relate and reach out to the world around us—the world that God created, called good, and has entrusted to our mutual care and respect. If our journey, and our actions, our service, are not an acknowledgement and outgrowth of what God is doing—of God’s Dream for Creation, we have missed the point of what Luke and John are telling us in these post-resurrection accounts.

The other day a person came into my office and said, “I believe in God, but I don’t feel like I’m living as though I do.”

It takes courage to speak this kind of self-awareness, and it really struck a chord, because it articulates a yearning that I believe many of us feel. And this is where today’s stories get to the heart of the matter. Paul didn’t remain on the Damascus Road. Peter didn’t stay on the beach. Their encounter with Jesus wasn’t a destination, but a threshold. To each of them, Jesus said, “Go.” Go. Feed my sheep. Go. Proclaim the Good News. Go and be part of what God is doing in the world; forgiving, healing, restoring, and reconciling.

For Paul and Peter, living their belief meant knowing themselves to be flawed yet forgiven; recipients of grace upon grace, newly freed to offer themselves in God’s service, knowing that they were fully known.

They would go on to turn the world upside-down. From scratch. Think about that.

From that Damascus Road, from that beach on the Sea of Tiberias, they started Jesus Movement 1.0 from nothing but a cross, an empty tomb, and a story to tell—a Story to end all stories.

We’re not starting from nothing; we actually have quite a lot. We have tradition, we have resources, we have faith. And we also harbor the yearning to live what we believe. Creation waits for us to do so. The Easter light is burning brightly and calling to us in this anxious world, if we have eyes to see and ears to hear.

Jesus says, go. Feed my sheep. Protect and restore my planet. Bring justice and peace to my people. Love my children.

Let’s live the resurrection like we believe it. Let’s put being human into practice.