Recording of the prayers

Perils of Being in the Wrong Story

Choosing the right story to explain the world to ourselves is crucial. Choosing the wrong story leads to disillusionment and an impoverishment of hope. Like the crowds praising Jesus as he entered the Holy City, we enthusiastically hail our next political savior until that is, – he or she no longer is. 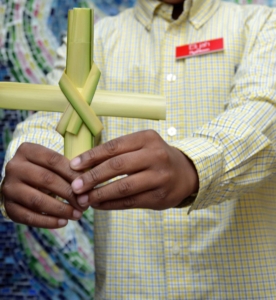 History does not [exactly] repeat itself but it [certainly] rhymes.

As human beings we construct stories to explain the world we experience to ourselves and to one another. This is the way we build meaning and purpose into our lives.

To add complexity there is also more than one way to tell the same story – again there’s news and then there’s fake news. We construct meaning and purpose into our lives as we make choices between competing  clashing and conflicting storyline – each vying for our attention and allegiance.

So, the question is: which stories will we choose? From among a bewildering choice of possibilities which stories matter most to us?

Palm Sunday offers a snapshot of a clash of storylines. Palm Sunday is the beginning of a series of snapshots from Jesus’ last week in Jerusalem before the Passover. On Good Friday we will arrive to stand before the image of a dying man on a cross.

Each Holy Week snapshots is like a prism refracting our associations into countless mirror images of our lives.  The snapshots of Jesus’s last week in Jerusalem before his death at a particular turning point of history are also timeless mirrors of the clash of history’s repetitive cycles of sacred violence – a storyline as old as human memory.

From Palm Sunday to Good Friday, we experience the repetitive cycles of human inhumanity.

Sacred violence is the violence inflicted to protect a storyline of empire. I’m defining empire as any unrestrained exercise of power in defense of a set of deeply held cultural, political, or religious beliefs. Usually, the motivation to sacred violence drinks from an intoxicating cocktail of all three.

From Rome to Rule Britannia and Europe’s legacy of colonial violence; from the revival of Putin’s dream of the Russian imperium or the legacy of American manifest destiny; history does not [exactly] repeat itself but it [certainly] rhymes.

Emotionally and spiritually bloodied by our passage before the snapshots of Holy Week’s violence we will eventually arrive at a different story – a new story – a bigger and better story – the unlikely story of Easter. Yet, we’ve some way to travel before arriving here.

In the snapshot of Palm Sunday we witness a clash and confusion of storylines.

The first is a Jewish storyline of national liberation. The waving of palms is a significant echo from the crowd’s Jewish collective memory – a particular echo to an episode in their ancient national story.

For some 160 years before, the triumphant Judas Maccabeus, the last leader of a successful Jewish rebellion against foreign domination, led his victorious partisans into the Temple – which the Syrian tyrant Antiochus Epiphanes had defiled by placing his statue in the Holy of Holies.

Using palm branches, the Maccabean partisans cleansed and rededicated the sanctuary after its defilement. On entering the sanctuary, they discovered miraculously the last light of the Menorah still burning – an event Jews, today, commemorate in the festival of Hanukkah.

Inhabiting the story line of national liberation, the crowds ecstatically welcome Jesus into the city. But they are in the wrong story – as they will quickly discover – resulting in their disillusionment and anger. Jesus may be the Messiah – but his storyline is God’s not theirs.

At the same time as Jesus was entering from the East, another storyline was unfolding as a second triumphal entry procession wound its way into the city from the West. The Roman Procurator, Pontius Pilate, at the head of his Roman Legion had also come up to Jerusalem for the Passover.

Pilate much preferred the sea breezes and all mod-cons  of Herod the Great’s former coastal capital of Caesarea Maritima – now the administrative center of the Roman occupation of Judea.

Pilate loathed and feared Jerusalem’s ancient rabbit warrens seething with civil and religious discontent. He most feared the pilgrim throng crowding into the city for the Passover swelling the city’s normal population of between 20-30,000 to over 150,000. The stability of Roman imperial rule required Pilate to come up to the city with a show of preemptive force to forestall any potential for insurrection.

Passover was Israel’s founding story of liberation from slavery. Pilate’s arrival was indeed a wise move, for the crowds hailing Jesus’ arrival saw him as the Messiah, but a Messiah from the wrong story.

In the week leading to the celebration of Passover we see with hindsight the lethal intersection of competing storylines.

Both are confronted by a third storyline concerning the next installment in the epic narrative of God’s love and vision for the world-through-Israel. This clash of storylines results in a chain of events that takes an unexpected turn – rapidly spiraling out of anyone’s control.

On Good Friday, we will revisit the twin themes of deliberative courage and the confrontation with sacred violence – the violence of empire. But on Palm Sunday, that is still several snapshots along.

History does not [exactly] repeat itself but it [certainly] rhymes.

Holy Week is the week during which we accompany Jesus on his journey to the cross. For some of us, this can be an intensely personal experience as our own experiences of loss and suffering – our passion – surface in identification with Jesus’. For most of us, however, the nature of our Holy Week experience is less personal and more communal.

As liturgical Christians we journey with Jesus as a community – each liturgical step along the way. Each snapshot is a prism refracting our own individual suffering and our identification with the overwhelming suffering of the wider world .

Liturgy is the transport – conveying us together through sacred time. In sacred time – where there is no past and no future only the eternal now – we move beyond memory, becoming in present time – participants in the events that engulf Jesus and echo across time into our current experience. We are well acquainted with the world of sacred violence currently unleashed in Ukraine and countless other places.

History does not exactly repeat itself, but it certainly rhymes.

Choosing the right story to explain the world to ourselves is crucial. Choosing the wrong story leads to disillusionment and an impoverishment of hope. Like the crowds praising Jesus as he entered the Holy City, we enthusiastically hail our next political savior until that is, – he or she no longer is.

We long to do the courageous thing – until that is, the moment when we don’t.

In sacred time we become participants with Jesus – as if we too are part of his band of disciples during this eventful last week.

With the disciples, we will share in the breaking of Jesus’ Passover bread and drink from his Passover cup.

With the disciples, we will accompany Jesus to the Garden of Gethsemane where we too, will fight sleep to keep watch with him through the night and early hours of Friday’s morning.

With the disciples we will follow Jesus on the way of his suffering, for we like them – will long do the courageous thing – until the moment when we we won’t.

History does not exactly repeat itself, but it certainly rhymes.